That’s what the fabric looks like to me, anyway.  It’s called “Paperweight,” so that may have been what The Fabulous Mr. Fassett had in mind, too.

I also considered calling it the More-Is-More Dress, after a comment I made over at Steph’s place, but More-Is-More would describe SO MANY things that I sew . . . .  😉 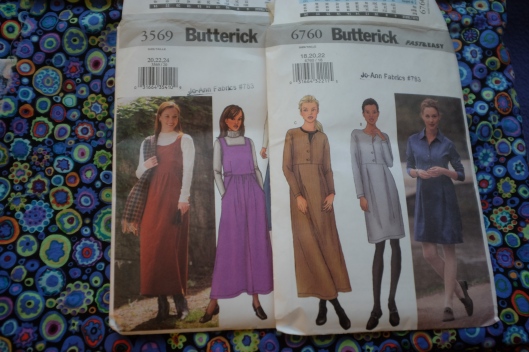 If you’ll recall, my plan was to use two old Butterick patterns for this dress:  6760 for most of it, plus the slash pockets from 3569.  The pocket modification was ridiculously easy–I just cut out the two extra pieces from 3569, folded down the top outside corner of the front skirt piece to match the one from 3569, and used the 3569 instructions to assemble the pocket. 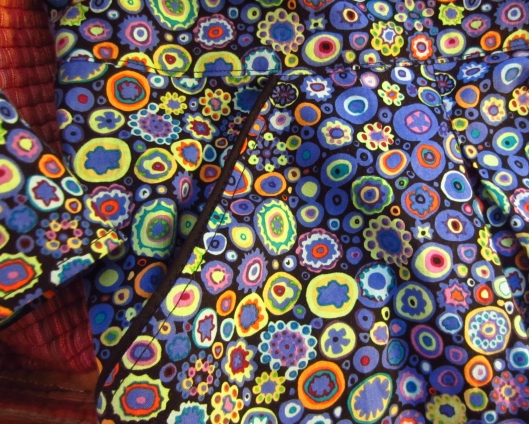 I kind of have a thing for bright colors against black, so I decided to emphasize the contrast by cutting the facings out of a black chintz from the stash and putting black piping on the pockets and bodice.  (More bright scraps for quilts–WIN.)

Bit of a warning here, if you’re liking B6760 and thinking about maybe seeing if you can find it on Etsy:  the instructions on this pattern are a little wonky, like they should have gone past an editor one more time.  I could see a n00b getting pretty frustrated with things like this:

I tinkered with the fit on this dress for a while, and somewhere in the middle of that process, I realized that I was putting the dress on and taking it off over my head with the bodice pinned shut–and wasn’t having any trouble doing that.  So I took the lazy route and didn’t do buttonholes, just sewed the buttons through all the layers.  And I had eight of these shiny black buttons in the stash, so I just used them all.  I’ve got PLENTY of single black buttons that I’ve been holding onto for years and will probably never use, and I’m not adding to them.

The fit on the bodice was a problem, and I’m still not completely satisfied with it.  The neckline was too high, which I probably should have anticipated, given that it’s meant to work with a shirt collar.  The folded-down edges help with that, but I suspect a collar would have been better.  Also, the shoulders are dropped slightly, which is not a great look for me.  I have taken them up a bit and added shoulder pads, which helps.

I may be overthinking this, though, because the bodice looks pretty good in the pics.  Maybe I’ve just been looking at it too long? 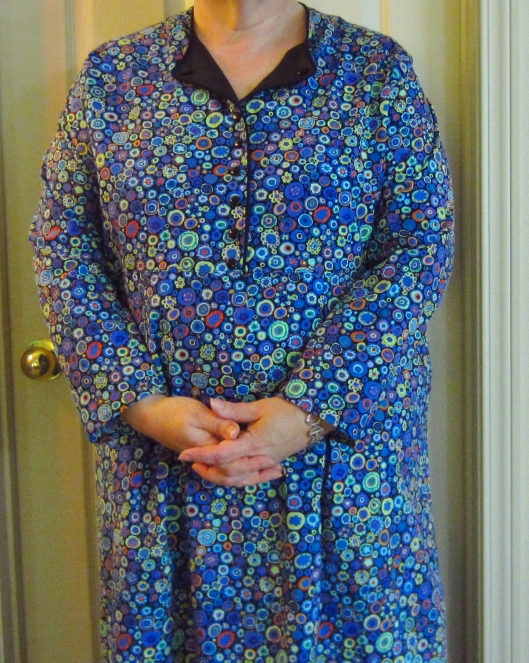 I’m also kicking around the idea of adding fisheye darts in the back, as there’s a little bit more fabric there than I’d like.  I think I’m going to wear it a few times before I decide on that, though.

In the meantime, though, this is a really comfy, fun dress, and I’m going to enjoy wearing it.  I love, love, love all the gorgeous color in this fabric and wearing the dress is going to be fun just for that reason alone.

You want to watch where you step in eastern Washington (taken at a rest stop between Yakima and Ellensburg).

Well, I didn’t really intend to, but I managed to let two weeks go between posts.  I’m still here, though, and still sewing, so let’s see how I did on my last list.

This project made me a little nervous–I was worried the fabric was going to be a nightmare to work with, I didn’t know if the style would work on me, I was unsure about the sizing, etc.  I cut a large, which was a bit of a risk, but the pattern has 5 1/2 inches of ease, so I figured that was plenty; I’m really glad I didn’t just go by my measurements, or this would have been MAMMOTH on me.  And I wasn’t sure what finished length I’d want on this style, so I didn’t shorten the pattern, as I do with pretty much everything.  I wound up cutting off 4 inches at the hem, and it’s still fairly long and drapey.

Everything went well until it came time to sew the hems.  The bottom layer was hard enough, but I used my machine’s stretch stitch and rolled hem foot to get it done.  The top layer was a major hassle, though; I made this hem narrower and, for some reason, the sewing machine just didn’t want to move the fabric along, and the stitches wound up tiny.  Partway through, I decided to go to a regular straight stitch, as this part of the shirt really doesn’t need to stretch, anyway.  So I’m a little embarrassed by the way the hem looks, but there’s no way I could rip it out without destroying the fabric.

I’m still loving this top, though.  It’s so soft and cuddly and purple!  I’ve seen so many cheap and nasty jerseys, but this fabric is just lovely, and I love the swingy drape of the style.  And it’s purple!

(Mark your scorecards, everybody–this is my finish #2 for the 2016 Q1 Finish-Along.)

Um, nope.  I actually spent the last week making these: 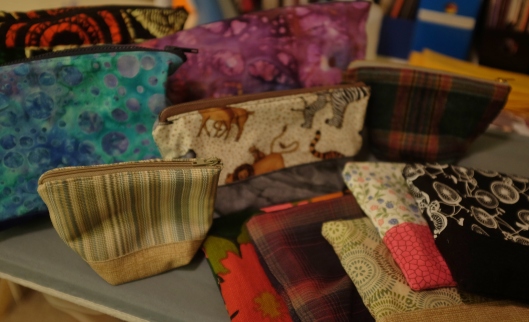 My partner and I had a table at the Bike Swap in Seattle last weekend, and I decided to make some little zipper bags to sell along with all the bike gear.  Sold a few, gave one to my honey, and the rest will probably go to SCRAP to be sold there.

That’s it.  I’m tired of it and I want it finished so I can move on.  I’ve been nervous about it, so I’ve been busily procrastinating away with other projects, but I need to just stop thinking about it and DO IT.  I’ve decided that my reward for finishing it is going to be making my lovely Kaffe Fassett dress.

And I’ll leave you with some recent photos from my travels.

Yep, eastern Washington in February, complete with tumbleweed.  This is a wheat field on a hill above Kennewick; partner and I were scouting possible bike routes. 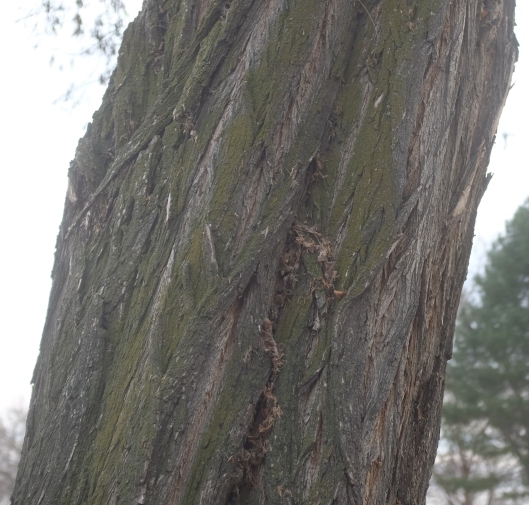 Interesting tree bark with moss from a walk with my mother near the fishing pond in Columbia Park.

Snowy hills outside Ellensburg on our way to Seattle. 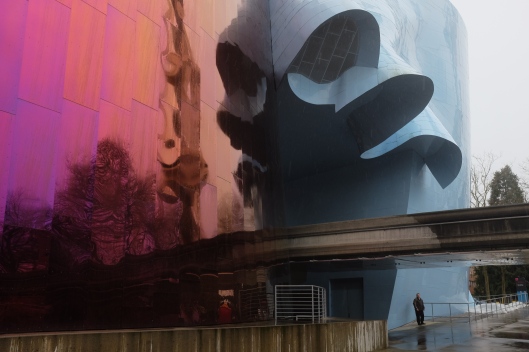 Needed to get a little color in there!  This is the Experience Music Project, which was very busy, despite the weather.

Have a great week everybody, and I hope you’re feeling bright and sunny, even if the weather is gray where you are.  Only two more weeks of February!

Took a frosty walk on Bateman Island on Saturday

(Make-A-List Monday is an idea that I borrowed from Sarah Craig over at Confessions of a Fabric Addict and I thank her for inspiring me to try it!)

Okay, so last week was supposed to be my organization/administration week?

I was really fighting my natural tendency toward procrastination, but I did it, because, to be honest, I didn’t want to have to write a bunch of lame excuses in this post.

(No word yet on winners for the prizes, though.  I did all that work and now I want a cookie, dammit!)

Done!  Post is here.  And I cannot tell you guys how happy I am to be making progress on getting some of these seriously ancient UFOs done.  I like the mix of old and new projects on my list.

4.  Deal with another pile of mending.

Oy.  Done (okay, all except for one sweater that I need to find a button for).  Bleh.

5.  Reorganize this corner of my sewing room/office/world headquarters.

Done!  All clean and organized and lovely!  And I went through all my craft books and craft ideas torn out of magazines and weeded out all the junk–a bag of books is going to SCRAP and two bags of paper are getting recycled. 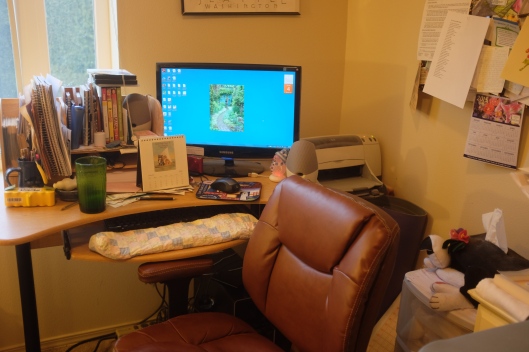 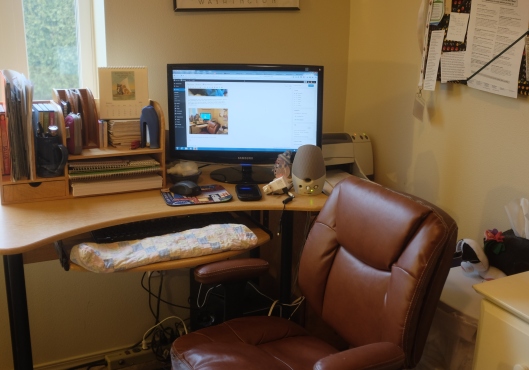 I’m still fine-tuning where I’ve got things, but at least the crap I don’t use is gone and the huge pile of filing on the right is put away.

So, the goals for this coming week.

Okay, I think that’s enough to keep me busy this week.

Have a great week, everybody!

Okay, it’s time to get all planned and organized and signed up for the 2016 1st Quarter Finish-Along, so let’s do it.

Here, in no particular order, are the projects I want to get done in the next three months.

2.  The flannel quilt, a leftover from last quarter’s FAL.  Sandwiched and pinned, just needs to be quilted and bound.  I plan to make the binding from a plain white sheet.

3.  Another leftover, the shark pencil/glasses/whatever case.  Just needs finishing and a fix of the zip.

4.  The black jumper that I’ve been planning for about forever.  Needs to finally happen.

5.  Purple jersey top.  Can you believe it–a pattern that isn’t 10 years old!  I got the jersey at SCRAP (some outrageous amount, 7 yards or something) and can’t wait to get this done.  I’m planning to make the gray version on the right. 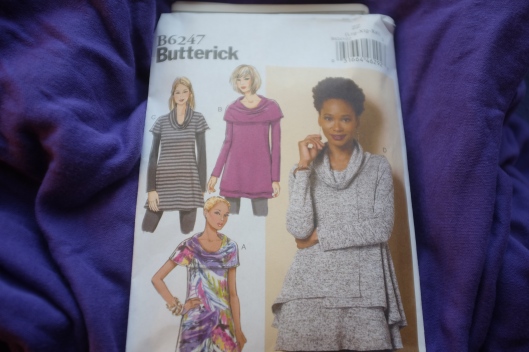 6.  Cross-stitch clock.  Oh man, I don’t even want to think about how long I’ve had this UFO.  I pull it out every 5 or 10 years and work on it a little bit more, but somehow it never gets finished.  It’s actually pretty close to done now–it just needs to be assembled and put in the wooden case.

7.  Black leggings.  I really need these!  I wear my lone pair of black leggings all the time, and they are ratty.  I need to find a TNT leggings pattern and make 10 pairs.  I like that this Greenstyle pattern has an option for a yoga waistband, which sounds SO COMFY.  Black knit is from SCRAP (yes, I am seriously stalking their knit fabrics and grabbing the good ones!) 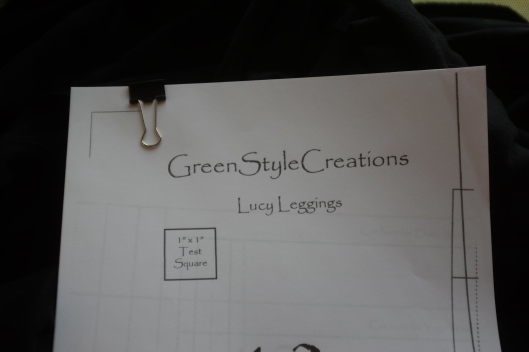 8.  Boxes for my sewing desk.  I need some way to organize the drawers in my desk, and I haven’t found a tutorial for what I want, so today I drew up a pattern for small fabric boxes custom made to fit the space.  They’ll be made from these Mary Engelbreit sewing-themed fabrics and I’m going to use interfacing and plastic canvas to stiffen them.

9.  Turquoise shirt for my honey.  This is his current favorite color, so we picked up this lovely fabric from Cool Cottons in Portland, and he asked for a henley. 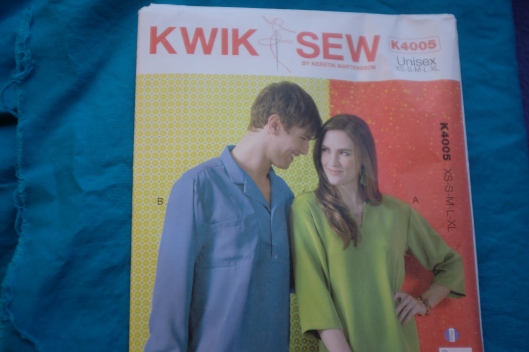 10.  Dress for me!  This Kaffe Fassett print also came from Cool Cottons; the plan is to make the long dress on the right, but with the pockets from the pattern on the left.  I also have black piping for the bodice edges.

11.  Finish the RSC 2015 quilt.  This is a pretty ambitious goal, but I’d like to at least continue work on the blocks so that maybe I can get it done next quarter.  I think I’m about halfway done on the star blocks, so there’s plenty more to do.

First priority here is probably to work on the little boxes, since I’m reorganizing my sewing room right now.  Then it’s on to the jacket.

I’m off and running!

ETA:  I have linked this post up to Scraptastic Tuesday and WIP Wednesday.