Banks of the Columbia River on a warm late-summer evening . . . good place to ponder what to sew.

I have this terrible conflict when it comes to making sewing plans.

On the one hand, I want to be free!  Free to follow my muse wherever she leads!  I am a feather on the breeze!  Etc., etc.

On the other hand, I really like sewing with other people, even if only online.  Sewing is usually such a solitary thing, and it’s so fun to do it with a supportive group for a change.

I’m a member of several sewing groups on Facebook and one of them is hosting a sew-along with the theme “destination.”  You make 8 items (one of them can be an accessory) between August 15 and December 15 and post them in an album in the group.  Your destination can be a real place you’re going to, an imaginary place, somewhere you’d like to go, whatever.

I thought I might give it a try.  I’m really feeling these days as if I’m turning a corner in my life.  I’ve had a pretty lousy couple of years, and I’m working on making things better.  As I’m hoping to be employed soon, I’m going to need some new work clothes, as well as some things for hiking and walking outside in the cold.  And I really, really need to keep my energy and momentum going.  I need to be excited about the future I’m working toward because, you know, this is all really DAMN HARD WORK.

So, off we go, destination:  Healthy and Happy!

In no particular order, here are my planned sewing projects: 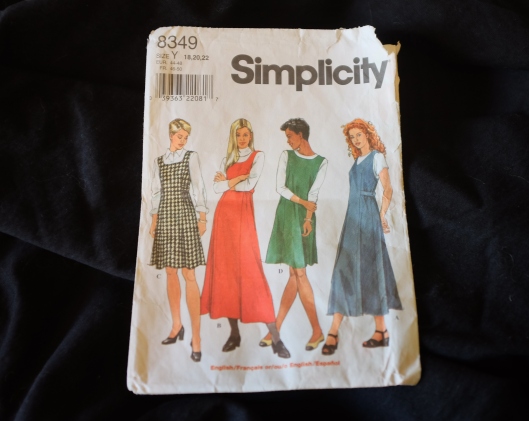 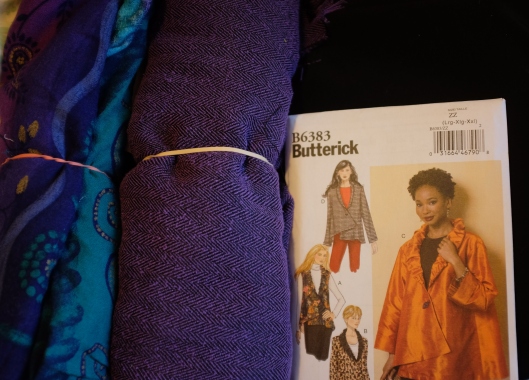 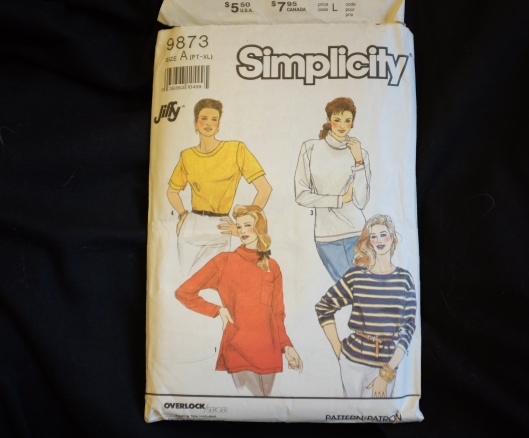 Here’s a better picture of the fabric.

OMG YOU GUYS JUST LOOK AT THIS YUMMINESS

So, that’s 9 projects (10, if you count the black knit cardigan) and I only need 8 for the sew-along, so I have a little flexibility.  I am not a fast sewer, and some of these will be somewhat complex, so this is pretty ambitious for me.  Even if I don’t finish, though, I expect to come out of it with some sharp new clothes.

As of right now, I have the circle skirt hanging up while I decide whether or not to hem it.  The brown flannel shirt and denim dress are cut out and ready to sew; I think I’m going to get going on the latter, as it’s about 95F here and I can wear it right away.

I leave you with a picture of Shelby demonstrating the proper use of a scrap of embroidered denim that your mom has given you to play with. 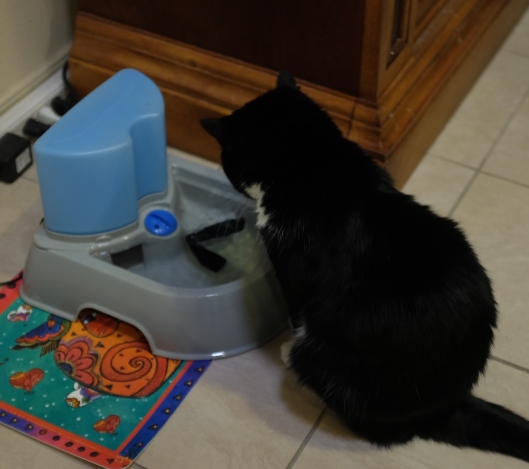 Off to sew.  Have a great weekend, all!

Some finished stuff, some travel pics–lots of pretty things to show you today!

First, I finished my unpaper towels.  They’re so pretty and colorful!   I made them with flannel on one side for absorbency, regular cotton or cotton/poly on the other.

These are a great way to use up scraps that won’t play well in quilts.  I used several pieces from the Freecycle box of fabric I got a few months ago, plus some I’ve gotten from SCRAP.  The flannel above was purchased years ago for a pair of PJs, but these aren’t really colors I like to wear any more.

Pooh discovers the towels aren’t made of delicious noms and quickly loses interest.

This snowflake flannel was a fitted sheet in its former life; the center of the sheet was worn and unusable, but the sides that went down over the mattress were still in good shape.

I used this tutorial to make the towels.  Choosing fasteners was a bit of a dilemma; I was certainly not going to buy a snap press that I would never use again, I didn’t have enough sew-in snaps, and I don’t like the way Velcro washes, so I used what I have a TON of:  1/2″ buttons.  I sewed them on first, then assembled the towels, topstitched them, and added my buttonholes.

I wound up with 19 towels, just because that was what I could get out of the fabric combinations I had.  And they’re great!  I’ve already had reason to use them a few times and they absorb well and wash up fine in the laundry.  I had seen a tutorial that suggested sewing an X across the middle of the towels to keep them from getting wonky in the wash, but I didn’t have any trouble with mine.

I’ll still keep paper towels around for particularly nasty things like draining bacon, but these should reduce the number we buy.  And it’s so nice to have all those pretty fabrics in my kitchen and being used!

Shelby knows what piles of fabric are good for.

Second finish this week was a tote bag for a friend of mine who’s being beat up by life pretty thoroughly right now.  Her birthday was in July, so I wanted to make her something new and special and beautiful, something that would be a visible daily reminder that people love her.

Because bags are what I do best, and she often needs to carry a fair bit of stuff with her, I decided on a tote bag and chose this pattern from the stash.

Not the most inspiring pattern photos ever, but I liked the bottle holder pockets and opportunities for quilting in view A.

So off I went to Joann’s for a special fabric to use.  Yes, ME–the cheapest of the cheap, Stalker of Thrift Stores, Mistress of Scraps–I bought fabric at Joann’s!  I was actually hoping they’d have Wonder Woman fabric that I could use for the lining (seemed very appropriate for my friend–understated on the outside, superhero on the inside), but they didn’t have it.  I did get some beautiful blue fabric and some lightweight denim, though, and made them into this:

I mostly followed the pattern, though I did more quilting than the instructions called for and I didn’t use patchwork.

As usual, I agonized over how to do the quilting, but in the end, I decided to keep it simple.  I just wanted a little texture, but subtle, so as to keep the focus on that gorgeous blue print. 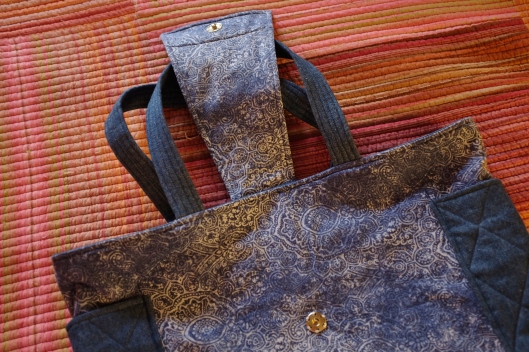 I substituted one of my big snaps for the Velcro called for in the pattern.  No inside pockets were included (bags are SO not the forte of the Big 4 pattern companies, and sometimes I wonder what they’re thinking when they put their bag patterns together!), so I added two divided slip pockets inside.

My honey and I met up with the birthday girl last Sunday in Ellensburg and set off to explore Olmstead Place State Park.  The park includes an old pioneer homestead, but I was more interested in the walking trail. 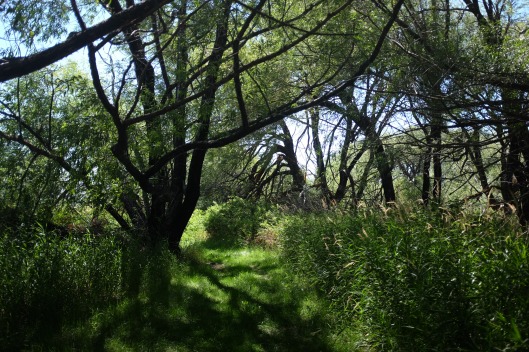 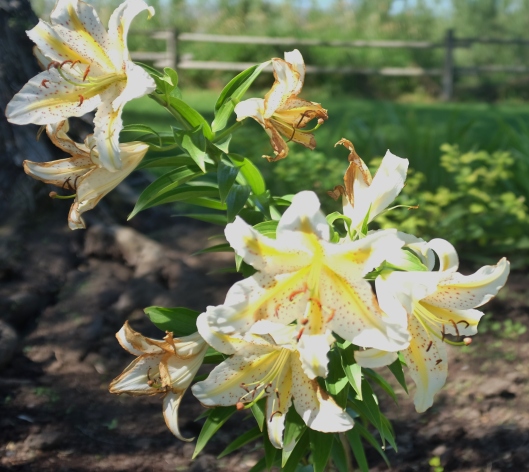 And an update on my latest project!  I participated in another Friday Night with Friends last Friday and worked on this, a blouse I’m making from a pair of pillowcases from Goodwill.

Yep, I know it’s hard to see the details here.  This fabric is hard to photograph.

I LOVE this fabric, and I’ve been wanting to make a peasant-y type blouse for a while.  However, I am seriously short on fabric, so this is going to be one of those MacGyver make-it-work-though-it-really-shouldn’t projects.  But I am in full I WILL NOT BE DEFEATED mode and powering through (with the help of a coordinating maroon synthetic).  More details to come when I get it finished.

Have a great weekend, everybody, and I hope all your pattern pieces are fitting on your fabric.

ETA:  I have linked this post up to Scraptastic Tuesday at She Can Quilt.