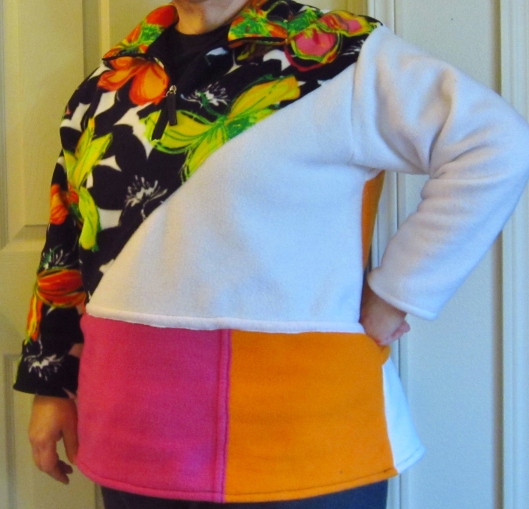 Flowers as big as your head–YEAH BABY 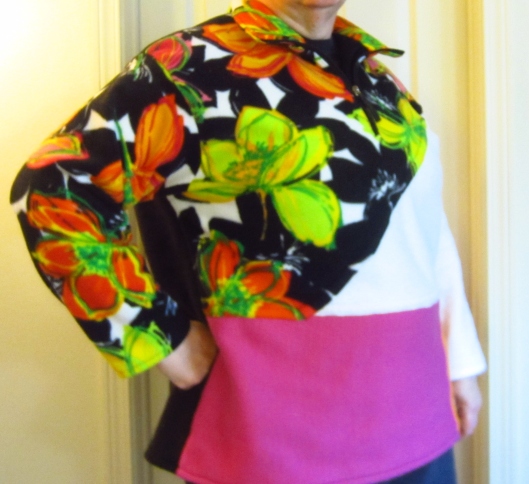 Finally finished up colorblocked fleece number 2, and it is great!

If you recall, the pattern I started with was this one, dated 1994:

This should have been somewhat quick, but it sure wasn’t.

I had less than a yard of the very fabulous flowered fleece, and smaller pieces of the other fabrics, so it was back to colorblocking, this time in a more complicated way than I did for the Hello Kitty pullover.  I’ve been collecting inspiration for a while now, so I had things like this and this in mind.  Seriously, I’ve been thinking about this particular project for so long that I was kind of tired of it before I started work on it.  What finally got me moving to make the pullover (despite my lack of enthusiasm) was just wanting to tidy up–fleece takes up a LOT of room and I wanted that big bag out of my sewing room.

Cutting this out was a major project, what with all the different fabric sections to put together and arrange in a way that would actually fit the pattern pieces.  I thought I had enough of the black to do a solid back, but nope–that had to be pieced, too.  The entire process took a solid 5 hours of work.  Oy. 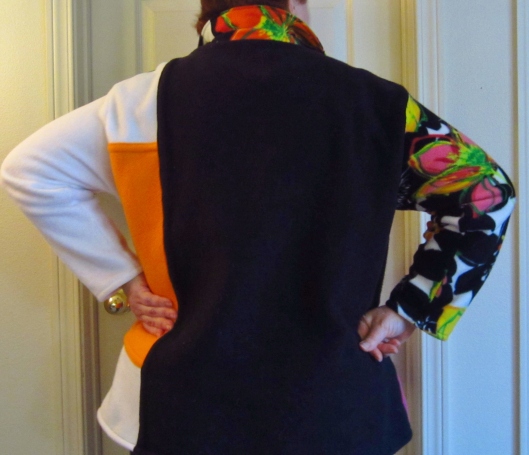 Managed to get the collar flipped up here, but it’s actually pretty well-behaved. 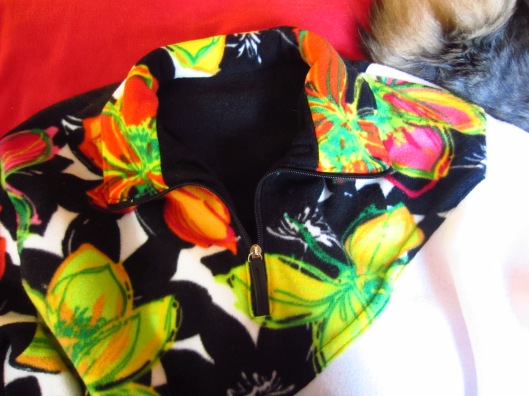 Bonus Pooh fluff, but I still didn’t manage to get that zipper pull to show up.

I cut out a large, the smallest size in my pattern, and I should have taken the time to grade down the sleeves and the top half of the front and back pieces.  I wound up having to bring the shoulders up 3″, take in the sleeves, take in the bust area, and cut 3″ off the bottom before hemming it.  On the plus side, though, all the trimming involved in those adjustments did mean that I was left with several long skinny strips of fleece, so I’m now set on Shelby toys for a while.  🙂 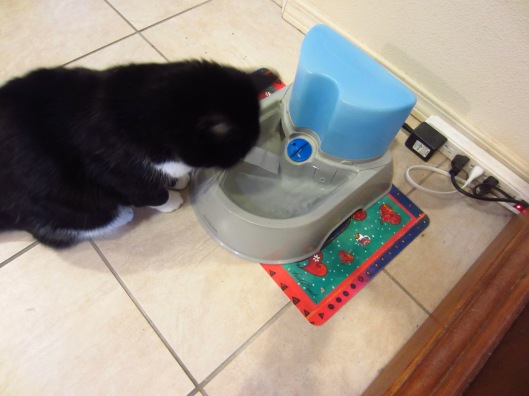 In other news, the sew-along I’ve been running in the Sew-Alongs and Sewing Contests Facebook group is going really well!  It began on January 9th, and already we’ve had several amazing finished projects.  The theme of the sew-along is Ridiculous Prints and I’m completely lusting after so many of the fabrics the participants are using.  Seriously, why do I not have any dinosaur fabric??!?  Huge hot air balloons??  Monkeys with red-rimmed glasses???

Here’s what I dug out of my stash for the sew-along: 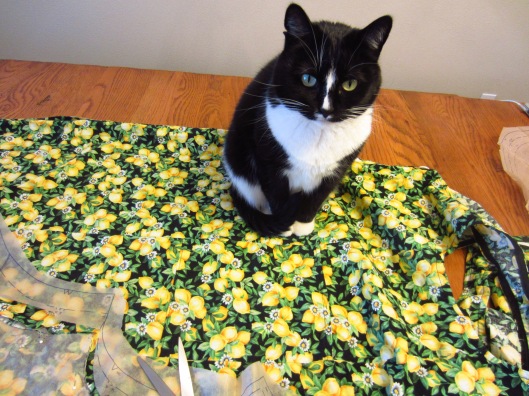 MAKE WITH THE CUTTING HUMAN

And this fairly newish pattern, which I’ve been wanting to try for a while: 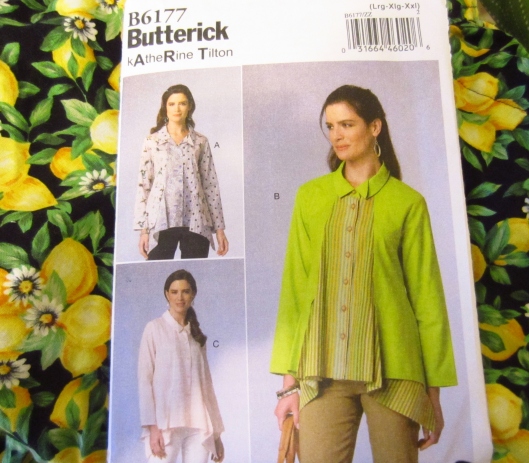 The real challenge for me on this wasn’t finding a ridiculous print, but finding a large enough cut of one to make something for a fairly big person.  This fabric has been in my stash at least 10 years, maybe 15?  My sister and I both bought some; I used some pieces of mine for purse linings and other small things, while she used hers to make a shift dress that she wound up giving to me, as she didn’t like the fit of it.  So I had about 1 5/8 yards of fabric, plus the shift dress, for this blouse.  I searched and searched through my boxes and drawers for a complementary fabric for the center front of view B, but couldn’t come up with anything more interesting than a plain white poly-cotton.  And I couldn’t get to the fabric store because of this: 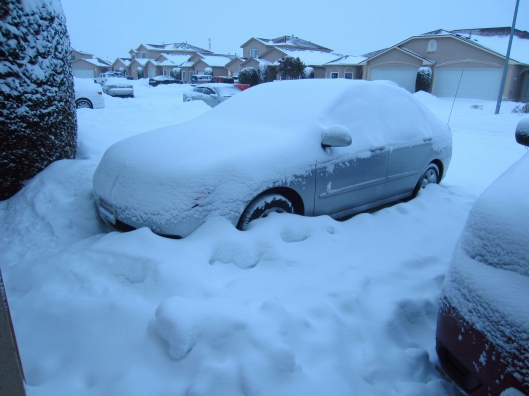 The fabric is white, but it’s very soft and has a nice drape, so I think it will work well; it’s actually the center portion of a bed skirt that I bought at Goodwill over the summer.  So it’s not the most exciting choice for the contrast, but maybe that will be my excuse to use some sexy buttons?  Hmmm . . . .

And in the midst of this, I found myself volunteering to run another sew-along!  I recently joined the McCall’s Facebook group, then decided to join their Dinner Date Dresses Sew-Along in July, then the person leading that month’s project bowed out and they asked for volunteers and I wanted to make sure the sew-along would still happen ’cause the dress is really cute . . . . 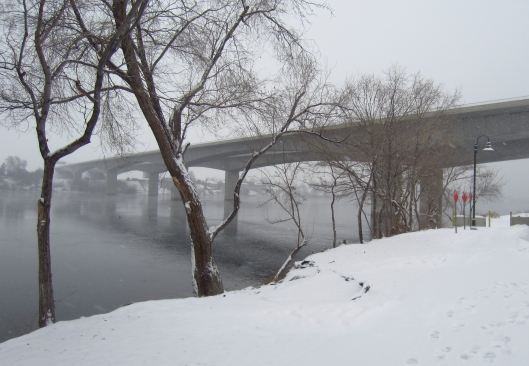 From today’s walk:  14F and enough wind to make the snow “fall” horizontally.  😦

Hello all, and I hope January is treating you well!

I’ve got some frosty pictures to show you, as well as some news, and, most importantly, sewing!

I participated in Friday Night With Friends last night, and did some work on another colorblocked fleece pullover.  Do you remember the wild flowered fleece remnant I got from SCRAP?  It’s now become this: 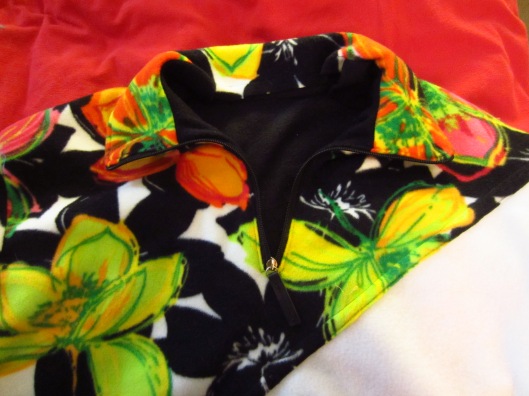 It’s hard to see here, but I’ve put in a black zipper which I took out of a cheap and nasty waist pack.  I like the long zipper pull on it.

I’m using an old pattern (dated 1994), also from SCRAP, which should win some sort of award for least promising cover photos ever.

Don’t bother fitting–just make everything as large as possible!

The line drawings, though, show that this is a nice basic pullover that’s perfect for colorblocking (i.e., not a lot of seams to complicate matters).

The fit on this thing is SUPER weird, though.  It’s designed to fit some sort of busty linebacker, as far as I can tell.  In order to get those slightly-dropped shoulders, I had to bring the sleeves up a full three inches.  I also had to narrow the sleeves by 4″ so they wouldn’t be massive.  I took in the side seams, but I’ve still got all this room for the huge bust that I don’t have, and it’s now too tight at the hips.  More work to be done there, needless to say.

And I can use all the fleece I can get.  It has been SO COLD and SO SNOWY here–pretty unusual winter for us this year.  I haven’t taken many photos because it’s been way too damn cold to go outside much, but here’s another one from this afternoon. 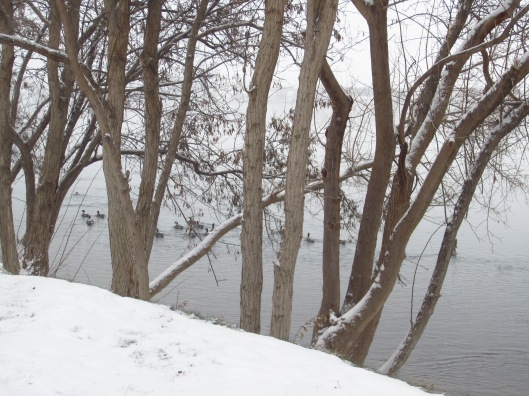 I’m starting to understand why “snowbirds” here travel south in the winter, while these obviously-not-very-bright geese and I stay here for some reason.

Partner and I took a trip to Portland last month and apparently brought the bad weather with us.  It was a bit warmer than at home, which meant the snow had thawed halfway and had the usual Portland rain on top of it. 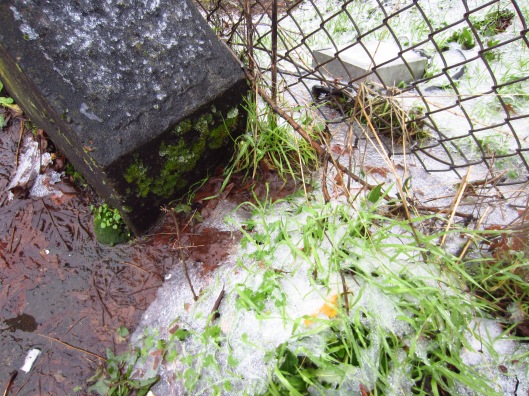 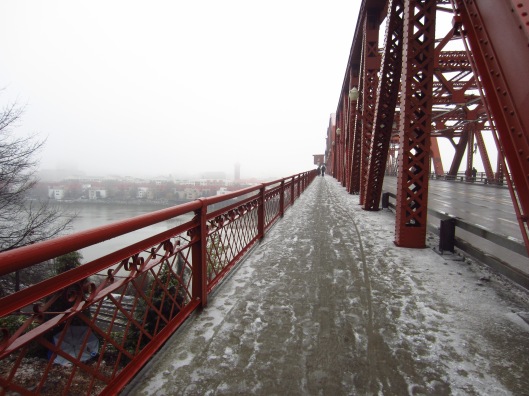 BRRRR . . . I had packed for typical Portland weather, not this, so I wound up wearing many, many layers at a time. 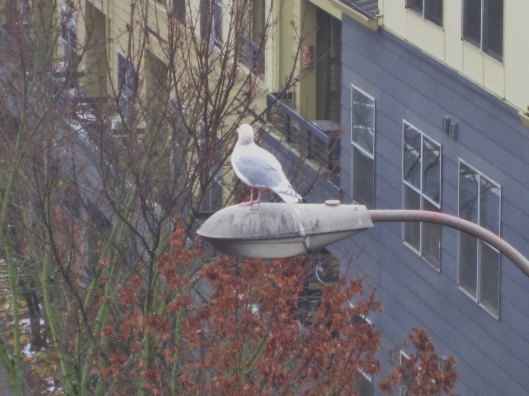 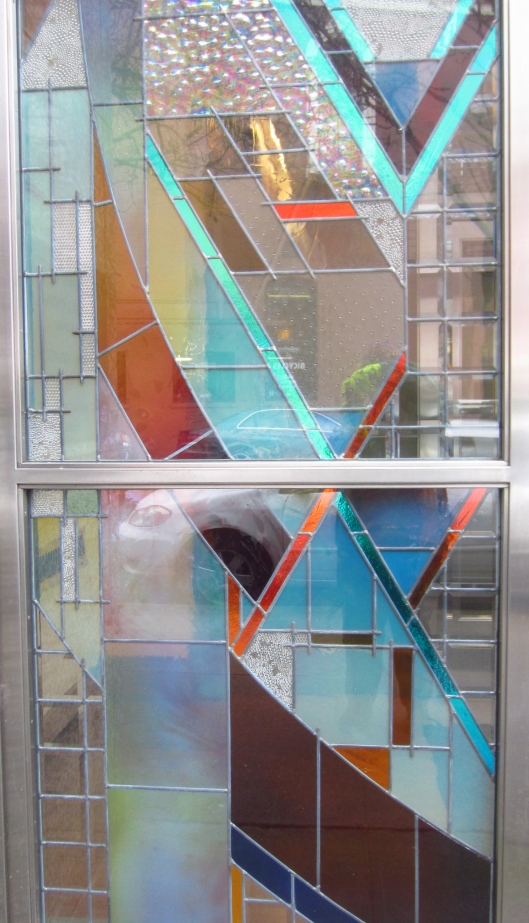 A small part of the large stained glass window in the fire station near the waterfront Saturday Market.

In other news, you remember the sew-along that I was doing with the Sew-Alongs and Sewing Contests Facebook group, right?  Well, I won!  The prize package consisted of several indie patterns, plus a gift certificate for some fabric–WOOT!  And I’ve also been asked to run a 2-week sew-along in the group, to be announced tomorrow.  That should be super fun and get me to FINALLY use some fabric I’ve had forever.  Stay tuned for more on that.

I plan to focus more on quilting than clothing this year, though.  I didn’t feel inclined to do any sort of wrap-up post at the end of the year, but I did look through what I’d made in 2016 and realized I managed to not finish a single quilt!   I’ve been missing quilting and I want to get back to it.  I’ve pulled out my blocks for the RSC 2015 quilt and I would like to finish that up–it’s way past time that I finally made a queen-size quilt for our bed.  In addition to that, I’ve got a commission to make a simple baby quilt for a friend of my sister’s, and my niece will need one for her baby that’s due this summer.

So that’s the plan for the moment.  I’m really glad I don’t have to actually stick to these plans that I make, as they’re constantly evolving, but that’s the plan right now.  Until it isn’t.  Which could happen at any moment.

Anyway, I hope you’re enjoying your January and keeping your feet warm (currently my number one goal).