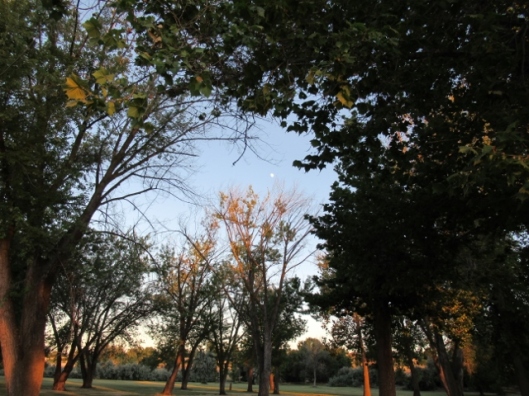 I have some random bits and pieces for you today, because, well, it’s been kind of a random couple of weeks.

We had another cycling event near here, this time with an actual sewing connection!  The Cascade 1200, a 1200-kilometer randonnée, began at the Space Needle in Seattle on Saturday, June 23rd.  The cyclists traveled across Washington state in a big loop, finishing up in Snohomish on the following Tuesday.

My part in that–not being the sort of person who rides a bike for 750 miles at a stretch–was to set up a control in the little farming town of Mattawa so that the cyclists could get water and food out there after everything closed down for the night.  My partner had originally intended to do the ride, but later decided against it and came out to help me with the control. 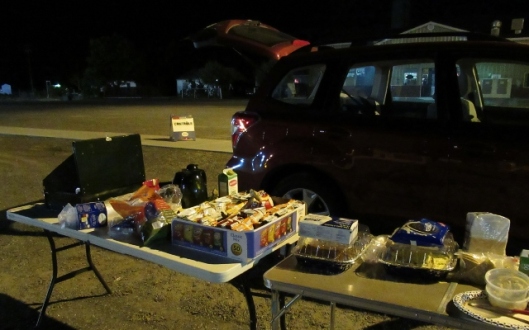 Here we are all set up under a street light with a cooler full of drinks in the back of the car, coffee brewing, and me making sandwiches out of frame on the right.

(I have these strange moments of self-awareness when I do this kind of thing.  I suddenly realize that I’m sitting in a parking lot in the middle of nowhere at 1:00 a.m. feeding meals to a bunch of people I don’t know, and I wonder how I ever got into this situation.  Volunteering can be quite surprising, like the hug I got from a South African cyclist because she was so excited that I had hummus to feed her.  And running across a parking lot after your camp stove at 2:00 a.m. because a storm suddenly came up and blew all your stuff off your tables.)

Anyway, the sewing connection is this:  all the volunteers were wearing event tees, and I hadn’t planned to because it fit me like, well, like this. 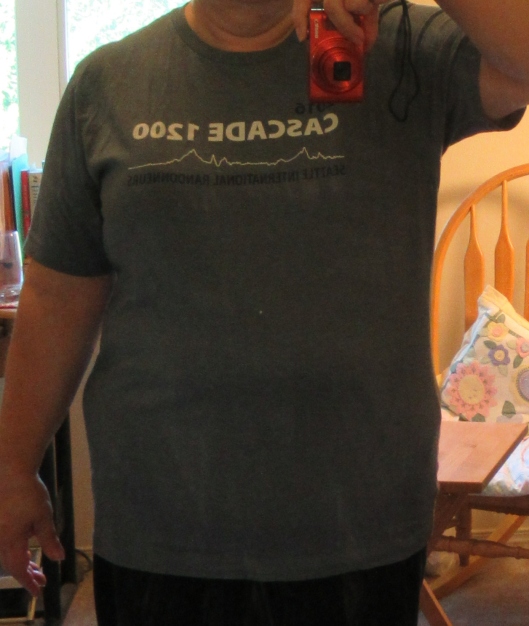 It was too long, too tight, and the neck was too high.

But then I noticed all the pictures on Facebook of the volunteers wearing them, and I started to hear a little voice in my head:  psst . . . you know you could alter it . . . c’mon, it won’t take that long . . . .

So the morning of the day we were supposed to go out to Mattawa, I decided to do it.

The only knit fabric I could find in my stash that even kinda sorta went with this slate blue tee was this scrap of cotton jersey:

No, it doesn’t go, but at least it’s busy and cheerful.

I cut a few inches off the bottom of the shirt and cut off the side seams from armpit to bottom; the sleeves and bust on this fit fine, so I only had to worry about adding width to the waist and hips.  Using a rotary cutter and mat, I cut two wedges of the jersey, 1/2″ wide at one end and 4″ at the other.  I’ve been hearing for a while now that cutting knits with a rotary cutter is the way to go, and it worked surprisingly well on this fabric.  I was worried that the knit would shift around or not cut cleanly, but no problems at all.

Then I inserted the wedges into the side seams and pressed them.

I cut off the neck ribbing maybe 1/4″ below the stitching and sewed on some binding.  Quick hem and I was done–literally about 15 minutes before we needed to leave for Mattawa. 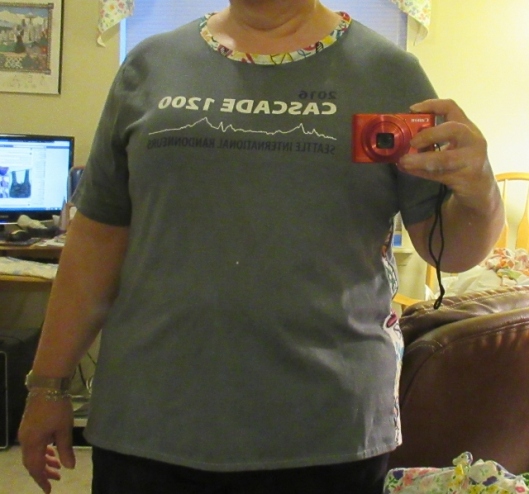 It still looks a little lumpy, but I AM lumpy, so that’s gonna happen.

It was a rush job, and most definitely not anywhere near being my best work, but it’s much more comfy now and just feels a lot more like ME.  I really intended to only wear it that one time, and then maybe use it for exercising, but I’ve found myself wearing it a fair bit.  The fabric is so soft, and the shirt is so comfortable now, that it’s just really nice to wear.

More importantly, I’ve been wanting to get into upcycling for a while now, and this alteration is my first tentative step in that direction.  More to come on that–I’ve actually got a second alteration project to show you, but I’ll wait until I can get some decent pictures.

In the meantime, here’s something interesting to consider.  I’m running a sew-along on Facebook again this July-August in the Sew-Along Dinner Date Dresses group.  I agreed to do the sew-along last fall, but it took me the longest time to find a designer dress pattern that I thought might work for larger or apple-shaped women.

Here’s the pattern and the fabric I got for it:

This is one weird design!  There are no side seams, just a front and back that extend and have ties; you can tie it in the front or back.  I have no idea if this is actually going to work, much less look good on me, but I think it will be fun to find out!

The fabric is a lightweight “burnout” cotton found in the “specialty cotton” section of the Joann’s in East Wenatchee.  I still need to come up with a contrast fabric for the binding, hopefully from the stash; I’m planning on making a muslin tomorrow, and that will help me get a better sense of whether this is a disaster in the making.  (Plan B, if this indeed does turn out to be a disaster, is to recut those big pieces into something else.)

So if you’re on Facebook and want to try this very weird pattern, join us!  It’s an easy pattern, but there are opportunities for practicing skills like making bias binding and doing narrow hems.  There aren’t many steps in this pattern, so making it over a two-month period will produce a nice, easy pace that won’t interfere with all your other summer fun.

Have a great week, everybody, and take a little risk if the opportunity presents itself.  You can always re-use your fabric for something else.